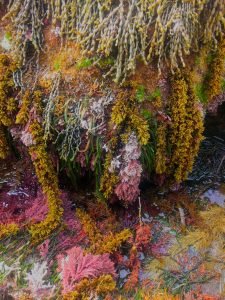 The amazing variety and wonderful colours of seaweeds are no surprise to seaweed lovers!  This is a photo to show those unfamiliar with seaweeds that they are not just brown and smelly…! This image was taken at low tide near Apollo Bay, Victoria, Australia, while on a family camping trip.

Zoe grew up diving in temperate waters near Melbourne, Australia. She completed her undergraduate degree and PhD at James Cook University in Townsville, Australia, studying the ecology of canopy-forming seaweeds (particularly Sargassum spp.) on coral reefs. She is now based in Sydney, and loves snorkelling and diving in temperate waters where there is such a wonderful diversity and abundance of seaweeds.  She took this picture on a Google Nexus 5x Smartphone. “It’s actually getting pretty outdated these days”, said Zoe, “it really goes to show that you don’t always need the best equipment to take a nice photo; sometimes the subject matter does all the work for you.”

A bloom of benthic blue diatoms of the genus Haslea (H. ostrearia, H. provincialis) covering macroalgae communities (Padina pavonica, Acetabularia acetabulum, Halopteris scoparia, Dictyota sp.) in the shallow water of Calvi Bay (Corsica, France). There, these diatoms regularly develop at a depth of 2 to 8 meters in Spring, particularly amongst these algae but also within the community of filamentous and mucilaginous epiphytes (Nematochrysopsis marina, Acinetospora crinita, Chrysonephos lewisii, Chrysoreinhardia giraudii) that appears seasonally in these habitats. For scale, the circular caps on the end of the Acetabularia stalks are 5 – 10 mm in diameter.  Blue diatoms of the Haslea genus produce blue pigments called marennine and marennine-like pigments, which have allelopathic, antibacterial and other properties. Nonetheless, the bloom dynamics of these blue Haslea in coastal environments as well as their potential interactions with macroalgal-epiphytic communities are little understood. The image was taken at a depth of four metres in May 2018 with a LUMIX TZ10 in a DMW-MCTZ10 marine housing, under natural light conditions, whilst scuba-diving along rocky shores of the Revellatta peninsula (Calvi Bay). 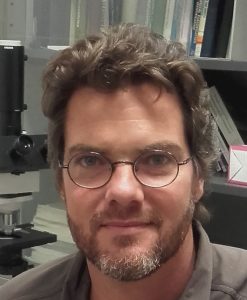 Damien Sirjacobs has an MSc in Bio-Engineering and in Oceanology  and received his Ph.D.in 2011 from the Oceanology Laboratory of the University of Liege (Belgium) and the University of the Azores (Portugal), studying the ecology and population dynamics of the macroalga Codium elisabethae in Faial (Azores) with the support of seabed imagery.  Subsequently he has been involved in marine geostatistics, bioinformatics and algae biodiversity and ecology.  He is now a teaching and research assistant at the Eukaryotic Phylogenomics Unit of the University of Liege, pursuing research themes related to the diversity, distribution and dynamics of seaweeds and benthic microalgae.  This work is focussed on 40 years of records from the Mediterranean reference site of Calvi Bay through joint efforts by the STARESO research station and the University of Liege, and more recently, the STARE-CAPMED project, and associated projects such as H2020 GHaNA [http://ghana.univ-lemans.fr/en/index.html]

Please click on image to see a larger version.