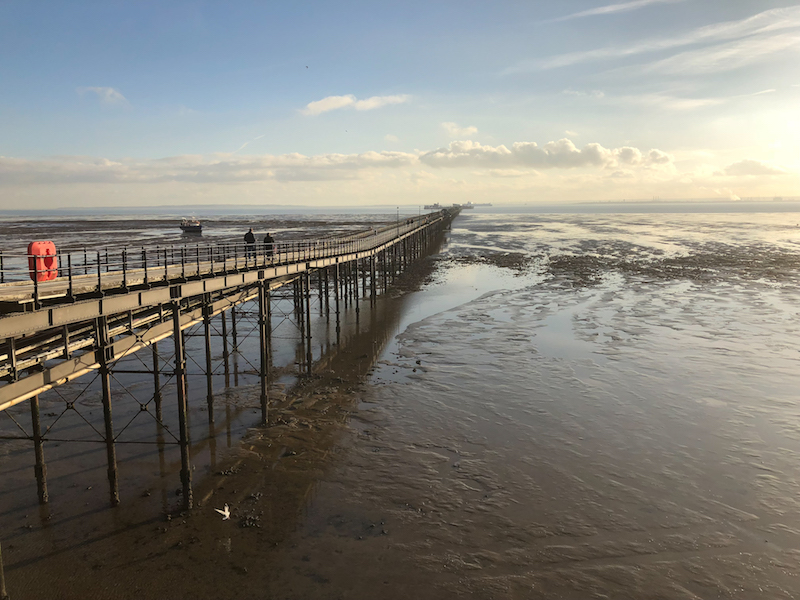 Francis Bunker in The Phycologist

Based in the imposing Radisson Park Hotel in Southend-on-Sea, the 2018 BPS conference venue overlooked the mouth of the Thames Estuary and the UK’s longest pier. It was a setting that reminded me of cruise liner. It’s as if conference set sail on a four-day mini-cruise. Here we all were based in the SS Radisson, with the officers (conference organisers Graham Underwood and Claire Passearelli), the crew (hotel staff and Essex University helpers inc. Nicky Slee, Amie Parris, and Philipp Siegel) and passengers (the jolly delegates).

I for one welcome the return to winter for the annual conference as summer is fieldwork time for me. Also, it provides a great opportunity to break out of the Christmas malaise.

When I first heard the BPS conference was to be in Southend-on-Sea in a modern hotel, my heart sank, especially after the 2017 conference overlooking the picturesque Menai Strait. My disappointment was misplaced as it turned out to be one of the most enjoyable conferences I’d experienced. It was well attended (125 delegates), very well organised and ran like a well-oiled machine, or in phycology speak, a well-lubricated frond (with all its underlying biochemical pathways). The hotel staff were welcoming and helpful. The facilities (conference rooms, spaces for posters, teas and coffees and the dining room) were all excellent. The panoramic sea view from the dining room brightened us all up over breakfast and lunch.

The first events of the conference were held on Monday afternoon with Council and Outreach and Education committee meetings. In the evening (and going back to the ocean-liner analogy), we made our own ways ashore to explore. To my surprise I found we’d docked in Turkey. At least that was the cuisine on offer in the restaurant we visited. The locals were very friendly and we returned well fed to our cabins. There was also aspecial Student Reception at the Fisherman’s Wharf.

Graham Underwood opened the conference on a grey and cold Tuesday morning with an introductory talk about what was happening where and when. Parallel sessions were run in two nearby lecture theatres, one concentrating on ‘General Phycology’ and the other on ‘Applied Freshwater Research’ and delegates had the opportunity to attend the talks most interesting to them. The quality of the talks over the next three days was excellent but it would be unfair of me to pick out my favourites. With two parallel sessions I didn’t get to all of the talks and anyhow, everyone’s interests differ.

Coffee time allowed delegates to chat or ‘network’ and to view the excellent array of research posters. The Manton Prize lectures followed coffee. These lectures area highlight of the conference for me. Talented young students from all over the world present results from their PhD work. These students are an important part of the society’s future and are more often than not supervised by established members of BPS. Praise must go to Irene Manton for having the foresight to sponsor this scheme.

After lunch, the parallel sessions continued until 4 pm when there was a break for tea and more poster viewingbefore we all reassembled for the presidential address. Gill Malin, BPS president for the last two years, gave a lecture entitled ‘Phycology on the edge’. Gill traced her career from its beginnings as a student at Liverpool University to her current post as Reader in Biological Oceanography at the University of East Anglia. The story of her career was interwoven with an insight into her personal and family life. Gill wasn’t at all phased by a projector failure half way through and this didn’t distract from the talk either. What Gill had to say was more interesting than the slides being projected and she showed her skills as an orator.

Festivities followed with a wine reception sponsored by Taylor & Francis. New exhibits appeared in the poster room. The artist Angenita Teekens was showing and selling seaweed art based on the cyanotype printing process perfected by the first female photographer, Anna Atkins in the mid 19th century. The Biodiversity and Conservation committee had a stand to show off the new BPS seaweed recording scheme where verified records are fed in online to the National Biodiversity Network.

By the evening, the good ship Radisson was docked once more and many of us had another trip ashore, this time about 20 shipmates ended up in Thailand having green curries in a restaurant where the Thai people spoke in a strange Essex accent.

Wednesday morning brought a different feel to proceedings. The sun was out and the sea front was lit up in brilliant winter sunshine. The day started with two parallel ‘special sessions’; one on ‘Mapping, conserving and sustainably exploiting seaweed genetic resources in blue biotechnology’ the other on ‘Microphytobenthic Biofilms’. The Manton Prize lectures continued between coffee and lunch and again an excellent suite of talks was presented by PhD students. With my schoolboy French and rudimentary Spanish, I marvelled at the ability of foreign students to present complex subjects in English with such clarity.

After a light lunch, I couldn’t resist the pull of the sunshine and went for a jog along the pier. The tide was low but rising steadily and I was struck by the clarity of the water as it flowed over the sediment. The special sessions that started in the morning continued all through the afternoon, again with excellent talks and finished at 3.40 pm with another look at the posters. So much to read and so many people to talk to.

Now the highlight of the event, the AGM! This popular session attracted 60 people, all bursting with ideas, hungry to hear the Treasurers report and ready to vote on any number ofcontentious issues and innovative proposals. Joking aside, it was great to hear summaries of how the society is moving with the times. A new website is coming out soon and a new applied journal is in the pipeline (thanks to the efforts of Juliet Brodie and Christine Maggs). We said goodbye to Gill Malin, president for the last two years, Jane Pottas, secretary for the last 9 years, and hello to our new president Graham Underwood and to me, your new secretary.

There was a short break to get ourglad-rags on and digest the constitutional matters of the AGM before forthe conference dinner. The grungy casually clad phycologists were transformed to into what looked like the goodand the great of Southend-on-Sea. Food was deftly served by a plethora of Radisson stewards and lively conversation flowed and wine was drunk in celebration of our gathering. Conversation was brought to a halt when our Adele tribute act came onstage. This was followed by dancing, at first stilted and then building to riotous. I’m sure the ship started moving as I staggered to bed after 1 am.

Thursday morning marked a return to January gloom but also the start of two new parallel sessions continuing on the themes of ‘General Phycology’ and ‘Microphytobenthic Biofilms’. Then, after coffee, there was a special session for all with more about ‘Microphytobenthic Biofilms’ for everyone. Soon it was lunch time and time to say goodbyes. Not for me, I had my first council meeting as secretary. I soon found that taking notes (knowing when not to take notes), distilling the essence of discussion and noting relevant action points is no mean task. I bow to you Jane for having done it so well for so long!

Soon it was time to all go our various ways. As a postscript, I notice that a few delegates were coughing and spluttering during the conference and I saw one chap sipping Lemsips in the coffee break. We were at the height of the winter ‘flu’ epidemic. I thought I’d escaped until I got home when I went down with the lurgy which lasted three weeks and then came back just as I thought it had gone. Oh well, at least we weren’t sea sick!