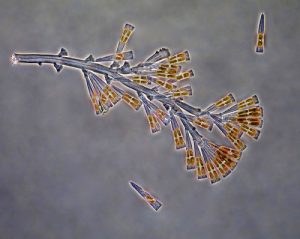 Phase contrast image of a live colony of Licmophora sp. More than twenty pairs of frustules are adhered to a branched stem. In every cell, each 120 μm long, two plastids are visible. Licmophora is a genus of diatoms epiphytic or attached to flotsam; what we are seeing is a fragment dragged by tidal currents.

The specimen was sampled in Bay of Santander (Spain) in March 2018 with an Apstein-type plankton net. This photo was taken with a Canon EOS 80D camera coupled directly, without any intermediate lens, to Nikon Eclipse E600 microscope (20x Plan Fluor Ph1 objective), using polarized light and a lambda plate. 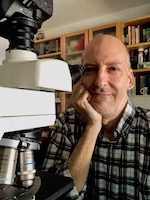 Rafael has a BSc and MSc in Zoology from the University of Extremadura in Spain and started his research career with Biodiversity and Ecology of Marine Invertebrates group at the University of Seville. His primary focus during this period was the taxonomy, symbiosis and biogeography of the ophiuroids (echinoderms, including brittle stars) of Antarctic waters. After that he worked with the British Antarctic Survey in Cambridge, examining thousands of specimens from several expeditions.

He currently lives in Santander, working as an independent researcher with a particular interest in marine plankton. A personal project to document the larvae of planktonic invertebrates has led to the production of hundreds of images shared through a personal website, a YouTube channel and a Twitter account (@rmartinledo). The primary motivation is taxonomic but a by-product of this is to make people aware of the great morphological beauty of lesser-known marine organisms. 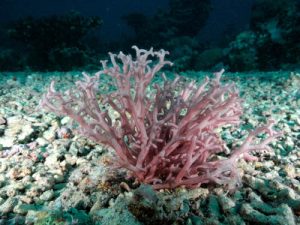 Over the last decade I have participated in several field trips to remote parts of northern Western Australia, with the aim of documenting the marine plants that occur in this largely unexplored region. Numerous new species have been discovered, one of which is this new Ganonema, collected from offshore atolls such as Scott Reef and Ashmore Reef, where this photo was taken. Ganonema is a genus of calcified, often mucilaginous red algae, the calcification occurring as granules in the cortex and not forming a firm skeleton. At Ashmore the new species was growing in coarse coral rubble at 12 metres depth. The photograph was taken while SCUBA diving, with a Nikon Coolpix P7100 in a housing with twin Inon strobes providing fill flash. 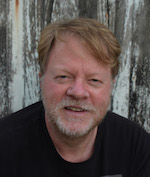 John Huisman received his Ph.D. from the University of Melbourne in 1986 and soon after moved to Western Australia, where he is currently the Curator of the Western Australian Herbarium. The focus of John’s research is the taxonomy of tropical seaweeds, chiefly those of north-western Australia. He has long held a passion for photography, particularly underwater and of his beloved algae, and his images have appeared in numerous books. He hopes his work promotes awareness of the algae in a different, positive light, not just as pond scum or smelly beach drift.. 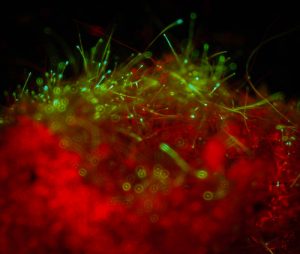 Oscillatoria sp. is a ubiquitous photosynthetic cyanobacterium named for the ability of it’s trichomes to move back and forth or “oscillate” toward a light source. This order of cyanobacteria is unique as it is able to conduct anoxygenic photosynthesis by reduction of sulfate. Oscillatoria sp. are found in marine environments, fresh water environments and even hot springs throughout the world. Some species are capable of producing anatoxins and microcystins.

The cell ultrastructure of shows single thylakoids which often run parallel to one another. The thylakoids contain photosynthetic pigments like chlorophyll a, carotenes, xanthophyll’s and phycobilins. The centroplasm represents the incipient nucleus called gonophore. It is represented by DNA fibrils. This photograph was taken in Tasmania, Australia at the Bay of Fires Conservation area. Here, a patch of an Ulva and mussel dominated community thrives offering a stark contrast to the white sand that has accumulated in a shallow rocky intertidal area. Bubbles on the surface of the macroalgae demonstrate how Ulva photosynthesis contributes to oxygenating the water. This photograph was taken with a Canon Rebel T1i using a 50mm lens. 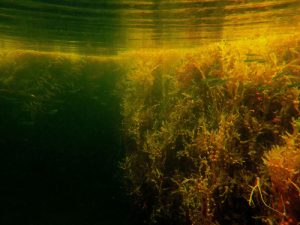 I took this image on my way back from a dive off Aillwee, in the Connemara region, Ireland. The visibility had been quite bad and swimming around the muddy shoreline provided an unexpected and more satisfying experience. The intertidal zone comes alive at high water with the now floating strands of the brown algae Fucus vesiculosus and Ascophyllum nodosum attracting shoals of juvenile fish in search of prey. I used an Olympus TG5 camera in an Ikelite housing with no additional lighting. 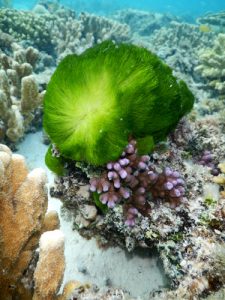 Chlorodesmis fastigiata settles on top of a coral. While the role of tropical macroalgae on coral reef ecosystems is debated, the interactions between macroalgae and coral are believed to play fundamental role in the degradation of coral reefs. This photo was taken in February 2016 in the Heron Island lagoon of the southern Great Barrier Reef, while investigating the dynamics of coral-algal interactions on coral reef ecosystems.